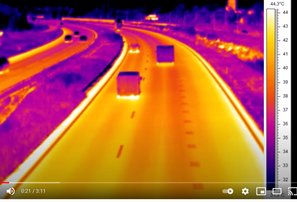 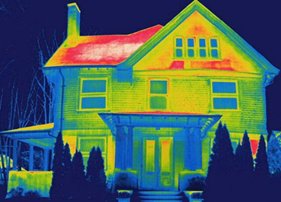 Heat Pollution (Youtube Video) is the increase in global warming primarily from how Man's energy usage that turns into heat or direct heating. A large source though comes from adding heat by darkening the planet with black roads, black roofs, and unreflective large cities. Dark unreflective surfaces convert the Sun’s energy to heat. It is not difficult to understand that any manmade new heat added to the planet will contribute to global warming directly. Climatologists assess this as a land-cover/land-use effect, but we use a simpler new term in this article - heat pollution. Therefore, heat pollution is not a theory, it is an accepted problem and recent studies suggest it accounts for over 13% of manmade related global warming as explained in this article. Heat pollution occurs most of the time by our use of dark colors. Black is the worst since it is the highest absorbing color of the Sun’s energy and creates the greatest increase in solar heat. Alternately, white is the best as it reflects sunlight. Any new heat pollution contributes to global warming and is not debated by climatologists. Heat pollution also can include heat from home direct heating and air-conditioning [14] etc.

The Earth’s natural land reflectivity is about 25%. Black roads and rooftops reduce this reflectivity which effectively pollutes the environment increasing warming every day. We might think of it as adding garbage to our land that adds up every day. It piles up and reduces the Earth’s reflectivity system which increases global warming. Heat pollution is also amplified since when heat is added about 60% is re-radiated back to Earth by the greenhouse effect. It is also amplified by Mother Nature’s feedback effect discussed below.

Most of us know what a cool summer ocean breeze feels like. However, city heat from black roads, black rooftops, and black cars all produce a hot urban breeze heating the air which is heat pollution. Heat pollution threatens health in cities, increases the dangers of heatwaves, hurts reservoir water supplies by increasing evaporation rates, increases the probability of forest fires drying out local vegetation, and hurts economies worldwide. Lastly, as we point out, in recent studies, heat pollution is responsible for over 13% of manmade global warming.

Most cities contain black roads and black rooftops along with dark sides of tall buildings that increase the solar surface area and city heating. These buildings trap solar heat, block wind, and amplify heat pollution in numerous complex ways. Amplification is often assessed by the footprint [1, 2] which extends by about a factor of 3.5 times larger than the cities area.  Because cities are very hot, they are often called Urban Heat Islands (UHIs). Many climatologists underestimate how much cities contribute to global warming, as footprint amplification [1, 2] is often not considered in estimates. A recent study [3] found about 13% of gross global warming is due to UHI heat pollution. Other authors have found similar recent results [2, 4-5]. There have been numerous older studies that have found higher levels.

UHIs also contribute to heat waves. Studies show that heat wave intensity, frequency and duration is much worse in large cities. It is even a bigger health problem in humid cities. A recent MIT study [12] in 2020 found that black asphalt road that heat up in the sun cause cities to average 2.5F hotter with 60% more heat waves which are 44% more intense. Greenhouse gases (GHGs) amplify any kind of heat pollution.  GHGs are like blankets on your bed. They keep you warm but too many and you get hot. The main GHGs are CO2, water vapor, and methane. They absorb heat radiation and re-radiate in all directions. They return about 62% of the heat back to earth. This amplifies any hotspot like road heat by a factor of 1.62.

Climate change feedback is the response of Mother Nature to the warming created by man. A key feedback comes from water vapor. As we warm the air from heat pollution and extra GHGs, heat causes the warm air to expand. Then more water vapor can fit in without raining. This is bad because water vapor is the major GHG and causes feedback [7]. Feedback response by Mother Nature is also ice and snow melting which reduces the reflectivity of the Earth and causes more warming. Warming expands the air and then the air can hold more moisture. Since moisture is a major greenhouse gas, this type of feedback is very strong and creates more warming [7].  Although not fully understood, climatologists anticipate that feedback is a factor of 2 [6, 7].

“On average heat pollution from black roads and roofs equated to 2.5 GWh (Gigawatt hours) per acre per year. This equates to 74,000 gallons of gasoline energy per year per acre of black roads or roofs or 7.5 times more energy than a solar power plant produces per acre.”

Solar panels prevent CO2 accumulation. However, white roofs would prevent heat pollution accumulation from housing expansions. That is, we are being counterproductive with simple poor color choices which can reduce the effectiveness of fossil fuel reduction efforts like solar panels and electric vehicle (EV) cars.

An Alternative to Heat Pollution is Earth Brightening

Common simple methods to brighten and increase the reflectivity of the Earth [8, 9] are:

·        Cool Roads (greater than 30% reflectivity, such as using a lighter colored concrete vs. a black asphalt road)

Black electric cars demonstrate a strong example of our lack of understanding, and illustrate the need for heat pollution awareness. An electric car that is black increases global warming more than a white gas car exposed to the Sun in a parking lot each day as millions of such dark electric vehicles from auto designers that reduce CO2 emissions will also increase solar heat pollution, creating more problems for the environment than their intended purpose.

The Department of Transportation (DOT) is the major contributor to heat pollution in their use making black asphalt roads. Many climatologist like my self have tried to tell them to stop but have been they do not respond to studies and my requests (for about 2 years now). Some city designers have tried to convert to cool roofs but it is a low percentage and even less work has been done in the area of cool roads. While heat pollution is easier to understand than greenhouse gases, most designers are unaware of the environmental damage created by the mass production of cars, roads, and rooftops. We have large fines for littering the environment, yet heat pollution, which threatens our environment, is unregulated despite a global warming crisis. We should assess fines for heat pollution.

Safeguards that Would be Important to Add to the Paris Accord

The Paris Climate Accord currently does not include any mention of heat pollution restrictions. As well there are two well-known alternative methods to reduce global warming using Earth brightening [8-9] ((improving the reflectivity of the Earth), and Sun dimming  [8-9] (blocking some sunlight in the upper atmosphere). Issues of concern to climatologists regarding the Paris Climate Accord are:

The agreement allows for the continual increase in heat pollution worldwide.

We cannot be 100% sure CO2 reduction will work. We can anticipate a high probability that fossil fuel reduction will not be enough. There is a high level of concern that CO2 reduction will be too late due to Mother Nature’s feedback (forest fires, snow and ice melting, etc.) and the fact that CO2 stays in the atmosphere for 300 years. CO2 reduction may not even be enough to combat heat pollution.

·    It is very concerning that heat pollution safeguards are not included. The agreement depends solely on CO2 reduction to slow global warming. This precaution is not enough as high-levels forest fires increases, drought occurs, and record-high temperatures persist.

There are no coordinated plans to reverse global warming, but only to reduce it.

President Biden’s plan, for example, could benefit from heat pollution restrictions. There are no provisions for alternate global warming solutions and his budget does not provide for any safeguards for CO2 solutions. His plan for funding roads and the new construction of highways is expected to contribute to large increases in heat pollution as DOT darker new roads continue adding heat to our environment.

We recommend at least 50% of US funding should go towards reducing heat pollution, Earth brightening [8-9], and Sun dimming  [8-9]. These are extremely difficult to implement and we suggest immediate help from an agency like NASA to coordinate and implement plans. Furthermore, CO2 reduction is a slow process where Earth brightening and Sun dimming provide immediate reversal results.

A Plan with Safeguards Would Include:

All roofs to be 25% reflective or greater.

where solar heat absorption is not needed for heating homes.

All cars to be 85% reflective or greater

Plans to include Earth brightening and Sun diming [8,9] ·       Reduction of greenhouse gasses

Redesign of the Paris Accord to provide reliability safeguard assurances

What You Can Do

Use a white roof and house color, brighten your driveway, ensure you are >30% reflective

·      Contact your congressman on regulation against black roads and roof tops

Don’t contribute to heat pollution problems. Buy a white car; they’re cooler and it’s a simple way to help. As well, Join me for a ban black cars etc. movement by writing a letter to your congressman that we need proper color regulation of cars, roads, and roofs. What better way to raise environmental awareness that colors matter.

Private Communication from author Guoyu Ren “We have a paper published in the Journal of Climate last year, showing about 13% urbanization effect in the global land surface air temperature trend estimated for the last 70 years. You could find it on my profile of GR. This is a complex issue, and we are going to make further investigation using more complete data.”

his website is posted by Dr. Alec Feinberg,   HeatPollution@gmail.com or dfrsoft@gmail.com

Alec Feinberg has a Ph.D. in physics from Northeastern University and has published several papers in climatology related to Urban Heat Islands effects and solar geoengineering to mitigate global warming. He has authored two books related to Physics of Failure/Thermodynamic Degradation Science, and Designing for Reliability. His main interests are in solar geoengineering climate solutions. He currently owns DfRSoft Research which finds solutions to physics of degradation problems. Using the new term, ‘heat pollution’ he hopes to raise awareness of this significant issue.

Summary of my paper's findings